After a few days at home we packed up again and headed to Maroon Dam for our first weekend away with the boat. I found enough courage to tow the boat behind the work ute and Colin followed with the van. After a nervous but uneventful trip we got to camp and were surprised to have the place to ourselves - after all it was Easter school holidays.

The camp ground is quite hilly with full grass cover and portaloos that seemed to get cleaned 3 times a day. The dogs loved being away again too.

On Friday morning we headed down to the dam access provided by the camp ground to launch the boat. It was a very muddy and shallow ramp (if you could call it that). Once we had the boat off the trailer the kids decided it was time to try the knee board. They made it look easy getting up on thier knees easily. Colin however made it look slightly more difficult but once on he carved it out over the wake.

A short lunch break back at the van and the kids were back at it again. We pretty much had the dam to ourselves with only a few boats out enjoying the sunshine and warm water. 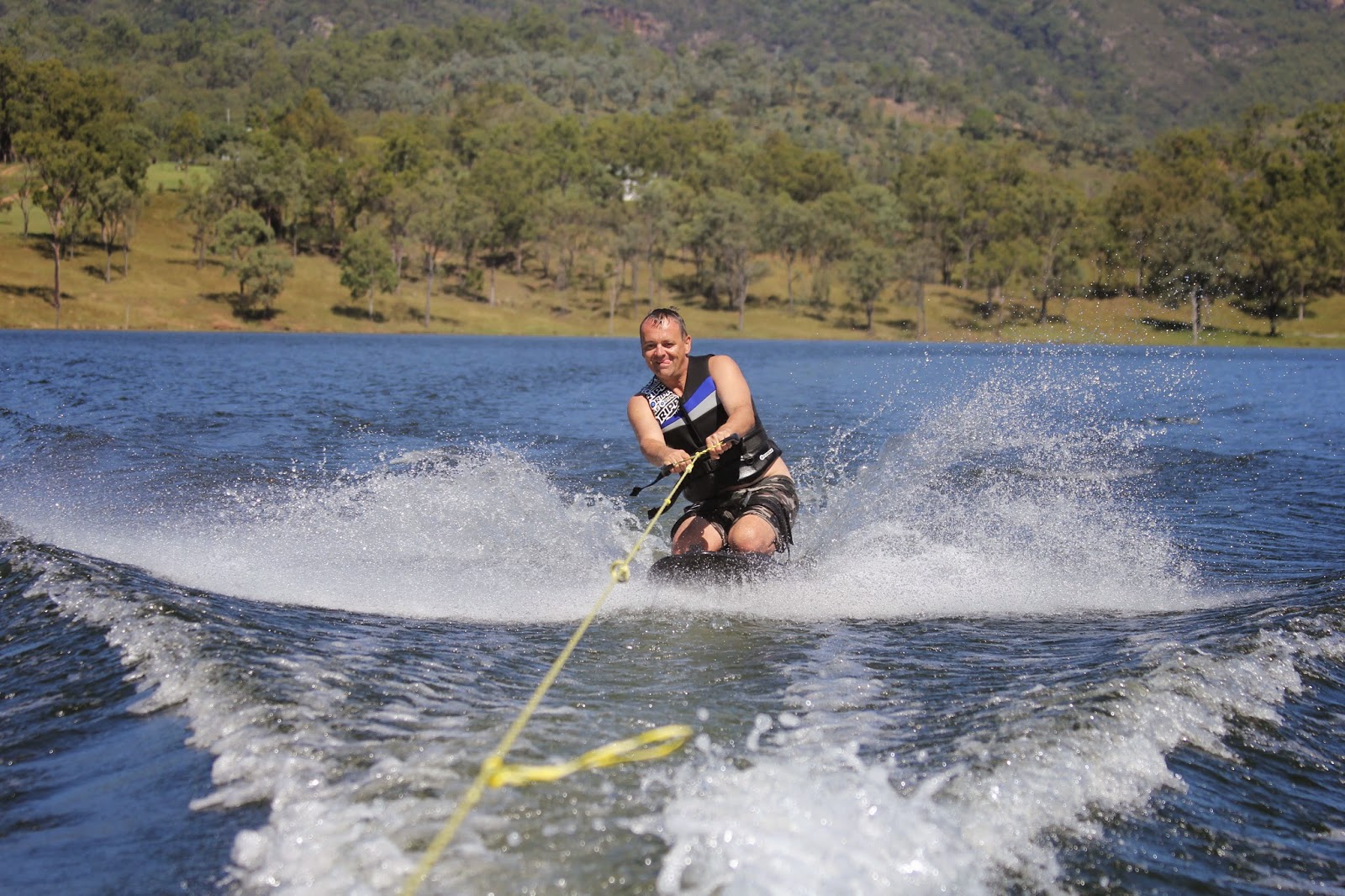 On Saturday we drove around to the proper boat ramp and easily launched the boat from there. We started out on the tube with limited "whipping" much to the kids and Colin's disappointment. I had to get better at turns. More knee boarding followed up by more tubing and it was time to call it quits for the day.


It has to be said that we all had a great time - maybe not as relaxing as other camping weekends but the kids are keen to get back out on the water again.

Posted by Amanda at 4:40 PM No comments:

The forecast wasn't looking bright for the Easter long weekend but we headed off on Thursday afternoon with clouds looming overhead. This Easter was a one car affair with the Jeep staying clean at home. After an easy 2 hour drive we arrived at camp and quickly set up the van and cooked ourselves some dinner.

We woke up on Friday morning to what can only be descibed as the sky was dripping. It wasn't raining but there was mositure everywhere. Scattered showers in the morning turned heavier as the day progressed and continued into the night.

Despite the conditions we decided to headout for a drive around some well known tracks. The rainforest hadn't changed but Amanda was sceptecal about doing Rufus' Run along the fence line - she thought it would be too slippery. She was right. A slight loss in traction meant that we were headed sideways down the hill - the grass was no help either. Once we reached a fairly level spot we tried to turn around and go back up the hill but to no avail. The only way out was down - there was no track just a very steep hill - it was somewhat like a rollercoaster ride to the bottom.
Once all the way down we had to negotiate soft muddy tracks using the Maxtrax to help guide and give traction.

Eventually back at camp we spent the afternoon relaxing around the campfire which needed some help to keep alight. The umbrella didn't make it through the weekend.

On Saturday we took an easier path around and there was no slipping down hills. There was a bit of entertainment over at the playground with a few cars making it look very hard in the mud.

A night Tag Along Run saw us doing a recovery and trying out the rainforest in the opposite direction at night. Colin enjoyed this.


The sun finally made its way out on Sunday morning. The kids were not disappointed with thier Easter eggs however we had to put the egg hunt on hold until late in the afternoon. We tagged along with other Levuka regulars and tackled what are normally easy tracks.

After some more sideways action and a few recoveries we were on our way back to camp to participate in the Inaugural Damper Cook Off. Gluten Free damper wasn't a crowd favourite but there was none left to take home. Another delicious meal cooked on the fire and we were out to watch the fireworks. An amazing display of colour enjoyed by everyone.