Into our 2nd week at Woodgate, with Christmas done and dusted we thought we'd head into Childers for some groceries. It was New Years Eve and we were looking forward to a long night relaxing with friends. Colin had been up since 4am trying his luck fishing at the beach. Little did we know that this was going to be a very long and memorable day.

If we were going to make a NEW YEARS resolution it was to be 'let's not spend $$ upgrading our cars in 2015'. A tough call. In 2014 countless mods/upgrades were done to the Jeep and the Patrol. Sure, Patrol mods were done for the Cape Trip and were worth every cent .. but in 2015 we'll take a break. So, on the last day of the year this still sounded like a good idea.

If you were to have car troubles there are plenty of BAD PLACES to have them - towing a van on a hot day in the middle of nowhere, on a Cape York Trip or up a soft sand beach. Luckily for us ours failed within 100m of the local mechanic.

Sitting in the Childers Woolworths carpark Amanda fired up her :) Patrol to cool it insidde while we loaded groceries. It was at this time when the engine let out a huge scream. A scream loud enough to convince you that ..... this was not good. Finding the mechanic was easy enough. David Fritz of HD Mechanical services, a short walk from Woolworths. No sooner had he heard we were in trouble he stopped work, cleaned his hands and headed to our car for a look. After a quick inspection (listen) he was confident the Turbo was not happy. With 100,000km you dont expect failures like this. 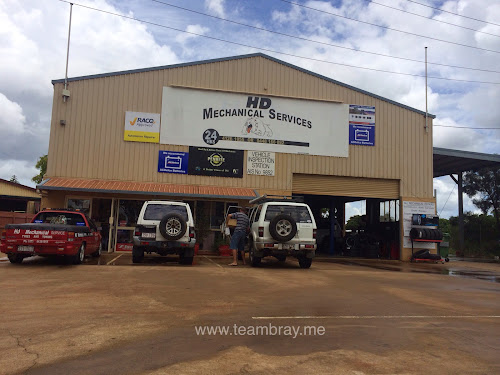 Back at the workshop an inspection camera appear to reveal what he had expected. Luckily the failure occcured at low revs and the Turbo remained in-tact. If metal comes away from the turbo and ends up being inhaled through the engine then we might be in a little more trouble. Boat anchor stuff !! At this stage we were led to beleive the noise was the Turbo. More on this later.

A quick phone call to our friend Paul at Nissan to see what he could arrange. A new Turbo is on it's way to Bundaberg with a planned repair in Childers next week.

At the time of writing (Friday) we are awaiting the call to say the Turbo is in Bundy. Fingers crossed that the next Part of Woodgate 2014 has a happy ending.

Meanwhile with the help of 2 families from Woodgate Caravan park we were brought back to camp with our groceries. Not having a car for a few days is not really a concern when you walk to the beach each day. Our extended roadside cover would get us a hire car but that would mean a trip to Bundy to grab it. No need.

Apart from the morning hiccup the rest of the day went was planned. Colin needed to find somewhere different to mount his Laser lights rather than use the car. The kids managed to find homes for 300 Glow sticks and Amanda had plenty of snacks to keep us all fed.

Everyone managed to stay up until midnight with Nathan not even having the energy to walk to the beach at 11.55pm. As the clock struck 12 party poppers cracked and fireworks could be seen in both directions on the beach. How good are FIREWORKS !!!

We had a visit from Charlie & Amanda & their crew. We met these guys on our Cape Trip and they decided to visit and spend the night.

Bait is normally caught around here with a yabbie pump. All of us would head to Theodolite Creek around low tide, wade through the to sand banks and pump away. Its doesnt take long until you get yourself a decent catch of bait.

This year as well as the bait pump we now have a CAST NET. A few quick lessons from Owen and Colin was casting. On about the 5th practice cast he managed to pull in a bunch of little fish. We were told these were Hardy Heads - great for flatheads.

The Jellies are back. We noticed a wind direction change and a day later the Jellies blew in for the 3rd consecutive year. Spend a few minutes in the water and you get to experience Sea Lice. It feels much like being bit by a dozen mozzies in 1 hit. Not painful but not a great deal of fun. Fun to watch 'first timers' jump in though. The lice seem to go for the soft skin so plenty of armpit and groin scratching is common. Luckily they cleared after 2 or 3 days.

Posted with Blogsy
Posted by ActionDad at 2:30 PM