We woke up at Eliot Falls Camp quietly concerned about the day ahead of us. Today is the leg of the journey we'd eagerly anticipated. It was also the leg of the journey which has been destroying cars. Bridge Creek (Nolan's Brook) was claiming cars every day so we'd be told. Patrols / Landcruisers, it didn't matter. Not everyone was getting through. Well, they were the stories coming back from travellers who had been to the top already. 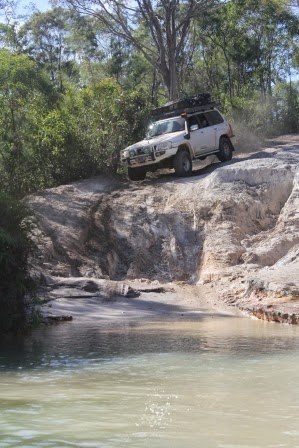 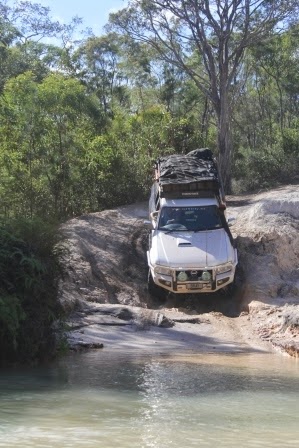 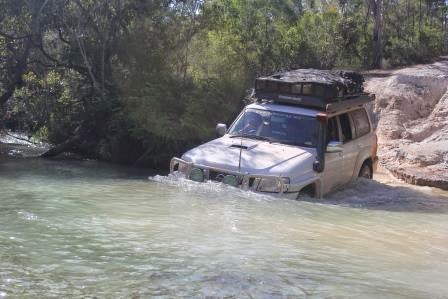 With some smaller water crossings to start with we were gently introduced to the type of terrain we should expect. Either sandy or rocky bottom crossings but generally firm. 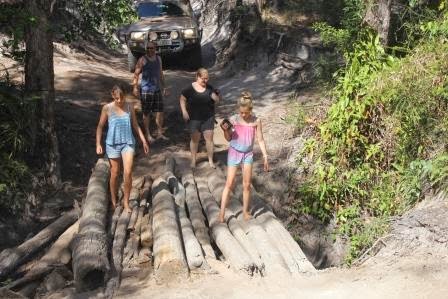 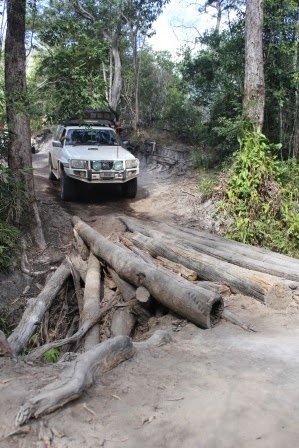 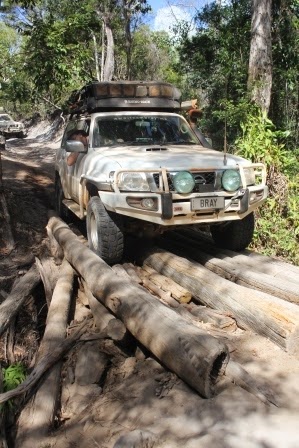 The deepest, an unnamed Ford was looking like being a challenge. Our plan was to let the cars cool and explore the best path to take. We were joined today by Charlie, Amanda and Matt from Hervey Bay in their chopped GU Patrol. Charlie took the short water crossing to the right which started with a quick drop into some slop ... but it worked.

2 guys on motorbikes were heading south here and required some winching to get them across. 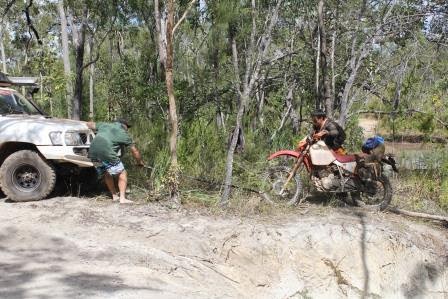 Christian and I were keen to take on the length of the Ford to see how the cars handled it. We had walked a path - the bottom was sandy but firm enough. We dropped tyres to 25 PSI and both drive through without a problem. 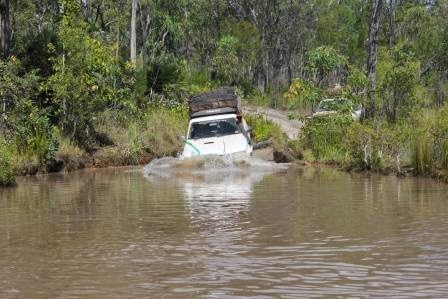 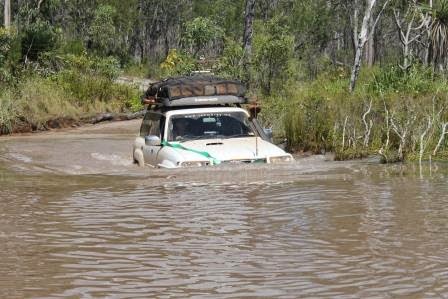 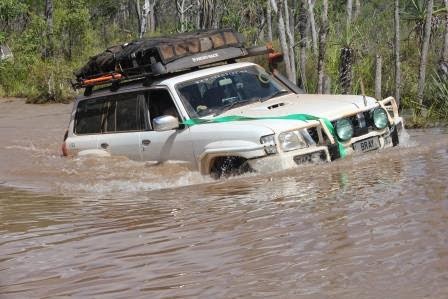 The next crossing - Bridge Creek, Nolan's Brook. People has set up camp on the North side and were keen to watch the action. On the North side were half a dozen cars .. 3 of them dead cars. One of the onlookers offered to tow our first car if we got stuck. Colin headed for the fridge and grabbed a 'can of courage' in the mid-strength variety.
We all walked the Brook and agreed on the best path. There were plenty of deep dips with soft bottoms. After watching plenty of YouTube videos of this crossing we thought we knew it all. Things had changed, today's path was nothing like we'd seen on the net.
We placed Charlie's son Matt on the left at a strategic point in the water to indicate the route to take. Once we reach Matt we would turn right across the middle and head for the 'viewing area'. We lined up the recovery vehicle with enough straps to recover standed car from any point. One person stood in the water ready to attach it and any time.
We dropped out tyres to 15psi all around to give serious traction with fully loaded vehicles. I'd never run the Patrol this low but I'd never done a water crossing like this either. Each car used a water tarp over the front to help create a bow wave of water and keep the engine a bit drier....if that's possible.
Charlie lined up his GU and headed in. No problem, he drove the planned route without incident. The plan worked!!
Colin waited around 10 minutes for the sand to settle before following suit. Christian followed and all agreed this worked perfectly. The next car wasn't quite so lucky. After reaching Matt and the half-way point he drove straight for the exit and it was too soft. His rear sunk and he stopped. We quickly hooked him up and dragged him out. His engine stayed dry so no harm done.
We were all very relieved to have made it. Hi fives and hugs were shared before we prepared a quick lunch. 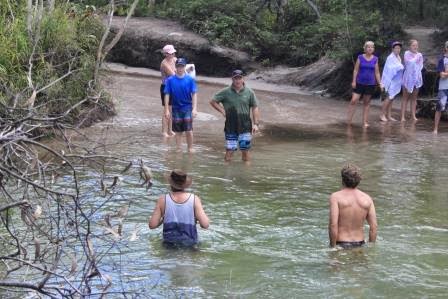 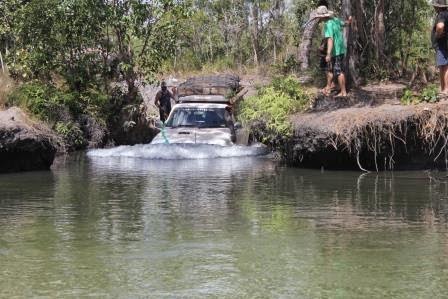 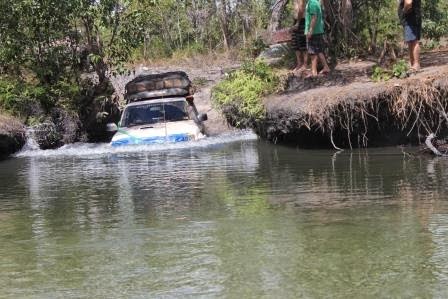 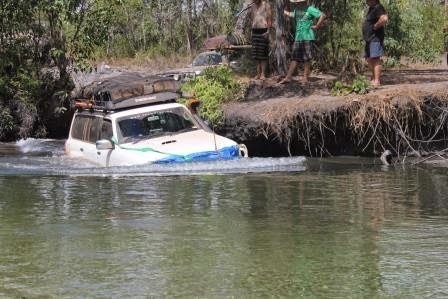 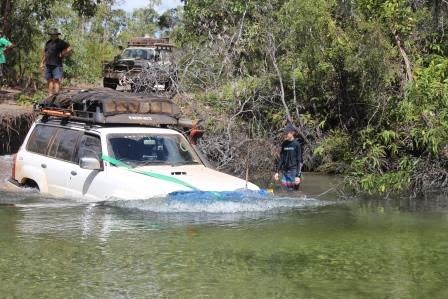 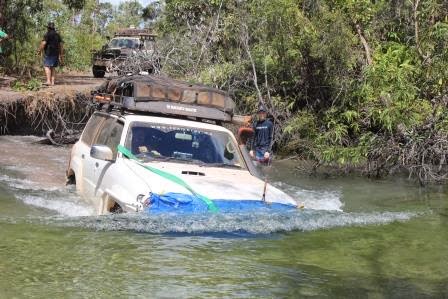 After getting each car through Colin lifted the bonnet of our Patrol to find it mostly dry. Amazing considering the depth we were in.
We were able to provide tools to a family in a flooded Patrol. The factory snorkel had not done its job. Luckily the owner was a mechanic and knew that he should now remove his glow plugs and pump the water out of his engine. I hope I see my long series 12mm socket again in a few days.
After lunch we continued North heading for our next camp on the south side of the Jardine River (Jardine National Park) 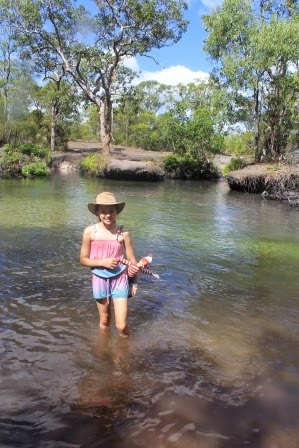 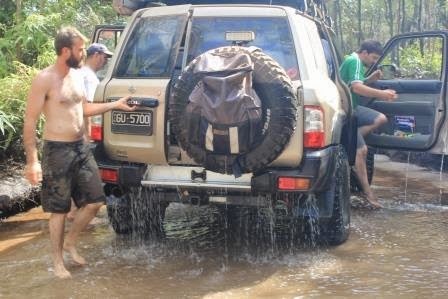 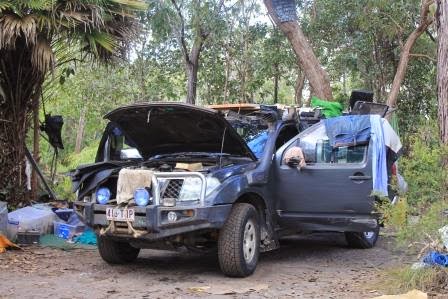