No sooner had Colin finished work and we were off to Woodgate. This year work finished up on a Friday so after a 'few drinks' and lunch with work there were jobs to do before we hit the road early Saturday. The first goal was to get to Gympie Maccas before 10am for (what the kids call) our traditional brekky. We made it with plenty of time.

We arrived at Woodgate, checked in and headed for our usual spot for YEAR NUMBER 11. This year we had prepared ourselves for some major changes. We would have campers behind us on land recently developed by the park owners. It was not too many years ago when kanagaroos would come in from the back and take bread from our hands. Now a fence is up and we have neighbours. But the change is accepted instantly by the kids who notice they now have a 100m long stretch of nice smooth concrete path to ride and play ball games on.

Our focus was soon set on the new ammenties. Wow, impressive. We're still wearing our thongs in the shower though. There's still no place like home.

Amanda didn't think it was right to post pics of the showers/bathrooms so you just have to trust me - they are an impressive improvement. In fact the whole park is looking great. Someone has spent a lot of time and effort making the place look great.

Once we were setup it was time to hit the beach. After 2 years in row of FULL of JELLIES we saw a beautiful clean beach. No Jellies, no weed !! The kids had new boogie boards to test out. The waves were just big enough for a ride.

This year's setup included a Marquee out the back to give some privacy from the expected new neighbours. This turned out to be a great place to set up the Christmas tree ... and bbq. Aussie Christmas !! As a special treat Colin let Amanda use the BBQ to cook breakfast one day too.

This might look like our typical breakfast but it tastes different depending on the location. True. With power this holiday Colin is spoilt with the Pod coffee machine. Bacon & Eggs with Tabasco and a Coffee - life is good.

We waited for the next low tide and headed to Theodolite Creek for yabbies. We had learnt from last year that you needed to walk through the low tide water, cross to the North, to find yabbies. You just need to return before the tides comes back in :) We struggled with yabbies for a while as everything was just way too small. We soon found a spot in the drier sand that was home to some beauties. With an air pump in the bait bucket overnight these little guys would help us catch some fish.

The next high tide (in daylight) was mid morning. A bit hot but the conditions looked great. We'd seen lots of tiny fish in the water each day so .. as the saying goes ... where there's little fish there's bigger fish.

Well we all spent the first hour or so wondering about the little/big fish theory as the only nibbles were coming from crabs. Colin had offered a reward for the first to catch a fish. A 'keeper' or not, it didn't matter. At long last Lauren screams 'I got one' and from the bend in her rod it looked like being lots of fun. Lauren worked it for a minute but unfortunately it got away. It was to be Laurens day though. Not too long later Lauren reeled in the first catch. A nice dart. Lauren took a break after the excitement and had a swim. Meanwhile the rest of us tried and tried. Lauren later returned and caught another dart while we watched in amazement.

During the morning Madi caught 2 little fish which went back and Lauren caught 4 - 2 of which landed on our plate that night.

Colin & Amanda took a break and had lunch at the park's Cafe. Nice Burgers! 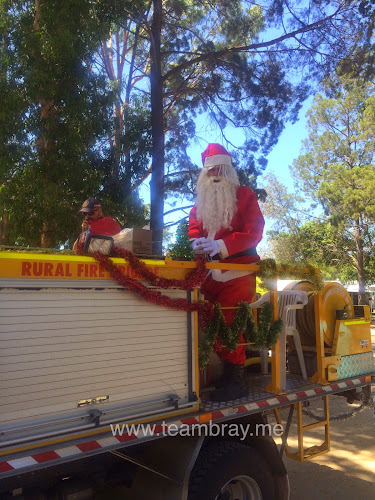 Our little camp Christmas tree setup under the Marquee. Kids were very excited to see all this.

These are the faces of 3 excited kids who woke around 5.30. 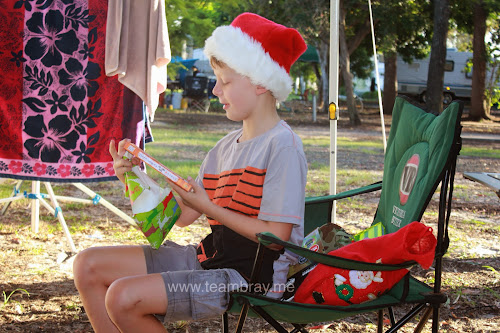 Even Daddy is very happy Santa brought Nathan this Rock Climber. It's a HEAP OF FUN!!

Posted with Blogsy
Posted by ActionDad at 6:34 AM No comments:

With only 1 week of school left for 2014 we thought we would check out a place we'd not seen before. Wooyung Caravan park approx 1 1/2 hours South of Brisbane.

Unpowered sites are the best choice if you like your bush camping with plenty of shade. Sites like this can be challenging to get into with a caravan as we discovered. We managed to put on a show trying to navigate ourselves onto a site. We soon ran out of light, kept calm, and found an easier site to camp on. No damage done....well nothing that wont polish out :)

Wooyong beach is best described as having lots of character. If you wonder where old rusty vans and buses go to die - THIS IS IT. Whilst there might be plenty of old vans to look at you need to stop and look at what makes this place great.

The park was well maintained, grass mowed, gardens looked great and even the permanent vans were tidy given their age.

Showers are give a choice of 20c for 1 minute RAINWATER to 20c for 4 min BORE WATER. Women's BORE showers were free.

In the morning everywhere you looked you would find a Water Dragon watching you walk by. Some were shy while others would pose for a photo.

The unpatrolled beach is amazing. The water was crystal clear. The sand soft and white (unlike the hard gritty stuff you can find in Northern Qld beaches). As the high tide went out the locals pulled up on the beach and had a great time pulling in countless dart. Must bring rods next time. Watch the outgoing tide and look for the channels where the fish appear to run through.

Posted with Blogsy
Posted by ActionDad at 5:06 PM 24 comments:

We weren't exactly sure about what to expect this weekend. Spending the October long weekend at a new place - Kenelworth Homestead. The 100 acre property is about 2 hours drive North of Brisbane.

We arrived on the Thursday afternoon to an impressive property which caters for schools camps and weekend campers. After checking in we set off past the handful of powered sites, across the impressive green camp area and headed for the river. Luckily there will still a few spots left. This weekend we were to be spoilt with lush green grass under foot!! A nice change from last weekend.

Of course the views of the Mary River were at the expense of proximity to the amenities block. Porta loos were scattered around camp and were surprisingly clean throughout the weekend. We did however bring our own loo so the girls didn't have far to go at night. For the boys - every tree is a lavatory.

We brought along plenty of our own wood for cooking and heating water .... and nothing beats sitting in front of a fire at night (exactly what I'm doing as I type this)

The owners were expecting 300 families this weekend. With those sorts of numbers you would expect the place to sound like Mount Panorama at night but it was very quiet. With very strict limited generator hours this was a great place to relax.

Swimming in the Mary River was great fun. This property has plenty of great access to it. There are open areas for the canoe and a few good spots to play. There was something odd in the deep wate though. One of the boys playing in our group complained of being bit. Soon Lauren was also bitten and FLEW out of the water. Lauren did some of the strongest swimming strokes we'd seen her do!! Various reports suggest this was either a Catfish or an Eel. Either way it didn't like anyone coming near its home.

We met some new families at Kenilworth one of which became fun rivals during the Inaugural Kenilworth Family Bush Olympics. We battled head to head in

We thought we had done quite well in a few of the events and even managed a couple of mentions during the presentation but we didn't win :( We have all vowed to practice in preparation for 2015 Kenilworth Family Bush Olympics.

The day after the Olympics we thought it would be great to hire some Canoes. We grabbed a 3 person and a single Kayak. We spent the first few minutes in the Canoe accidentally hitting each other with oars meanwhile the single person Kayak slowly sunk. Boating just isn't our thing.

Tonight we're sitting around the fire having just eaten another yummy dinner. It's Grand Final night so we're expecting it to get rowdy here soon.

On the way home we went inland via Sommerset dam to avoid the traffic. We stopped in at The Spit day area and were lucky enough to find a great parking spot.

Posted with Blogsy
Posted by ActionDad at 8:30 PM No comments: